I've spent the last year or so reviewing Gene Kim's new book - the Phoenix Project and encouraging him to get it finished. It came out this week, is the top business book on Amazon as I write this, and I got a nice back-cover quote shown below with Gene's actual finger in the photo. 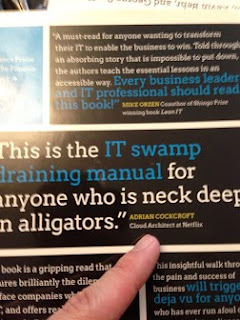 Many years ago someone gave me a copy of The Goal, which is the inspiration for The Phoenix Project. In both cases the book is a novel about a company that is dysfunctional and on the verge of going out of business. The lead character is dropped into the job of figuring out how to dig their way out of the problem, and in the case of The Phoenix Project, the company fumbles its way from legacy enterprise where IT isn't regarded as central to their success, into the modern world of agile development practices and DevOps deployments where IT becomes a competitive advantage.

Don't just read it, give copies of it to your friends in management. It should be on every CxO's bookshelf.

Posted by Adrian Cockcroft at 5:17 PM